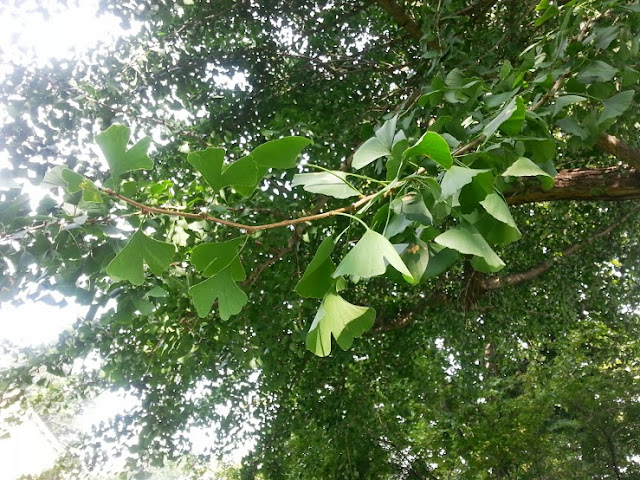 Why is that so interesting? Well, at the end of the Permian period there was a mass extinction. And during this extinction a whopping 83% of all extant genera went extinct. But not Ginkgoaceae*. They went on to become a dominant tree species throughout the Mezozoic Era (the Triassic, Jurassic, and Cretaceous periods) and fossils from this era can be attributed to Ginkgo biloba. That means G. biloba has existed for over 250 million years!

By the end of the Pliocene (2 million years ago) the Ginkgo species in the fossil record seemed to disappear and it was assumed the Ginkgos had gone extinct. But in 1691, a German naturalist named Engelbert Kaempfer visited a Buddhist monastery in Nagasaki, Japan and witnessed the grove of Ginkgo biloba trees that grew there, attended by the monks. Kaempfer brought seeds back to the famed botanic gardens of Utrecht in the Netherlands where the subsequent trees still grow today.

Ok, I’m sure you’re thinking that is all well and good, but where is the sex I promised? Well, I have a few things to say about that. First, did you know that Ginkgo trees have a sex? They are dioecious plants, which means they are separate male and female organisms (you’ll notice most plants produce both male and female gametes on the same individual plant).

“But, Sarah Sexy Plants,” you’re saying, “that is literal sex, not sexy sex! I feel like I’ve been lied to!” Don’t fret! Ginkgo has been used as an herbal aphrodisiac for many many years. And while most herbal aphrodisiacs are generally not known for any substantial scientific findings, it turns out that there might be some validity in Ginkgo’s use. Taking Ginkgo as a supplement thins the blood which in turn improves circulation. Why is that important? Well, not only does increased blood circulation increase brain function (which it does) but more blood flow to sexual organs means better functioning sex organs, both male and female. Ginkgo has actually been used to treat decreased sexual function and desire that occurs as a side effect from anti-depression medication. Pretty good for a plant that died over 2 million years ago.

* Interestingly, Ginkgos are known for surviving many harmful extinction events. Most recently, there are Ginkgo biloba trees growing in Hiroshima, Japan that were planted before the detonation of the atomic bomb. Not only did they survive the blast from the initial explosion, but they survive to this day, showing no mutations of the leaves or other ill effects from the high radiation levels. Pictures of these amazing trees can be seen here.