The little Viola tricolor has had quite a life. It’s a little wildflower, native to Europe and introduced in North America where it has spread and naturalized in our open fields and transitional woodlands. It is one of the most well known wildflowers and yet it goes by a multitude of names: Johnny-Jump-Up (or the creepier Johnny Jump Up and Kiss Me), Love-Lies-Bleeding, Heartsease, Love-In-Idleness, Tickle-My-Fancy, Come-and-Cuddle-Me, Meet Me In the Entry, Kiss-her-in-the-Buttery or the somewhat less lusty Three Faces in a Hood or Wild Pansy.
It has been the topic of great literature and mythology. Roman myth states that one time Cupid missed his mark and instead the arrow landed on the wild pansy. It imbued the flower with powers of love and desire and has symbolized faithfulness in love since ancient times.
Shakespeare seemed to have a great love for the herb, as well. It was the plot device for A Midsummer Night’s Dream:

Yet marked I where the bolt of Cupid fell.
It fell upon a little western flower,
Before milk-white, now purple with love’s wound.
And maidens call it “love-in-idleness.”
Fetch me that flower. The herb I showed thee once.
The juice of it on sleeping eyelids laid
Will make or man or woman madly dote
Upon the next live creature that it sees.
-Oberon, A Midsummer Night’s Dream, Act II Scene 1

And its effects were described in The Taming of the Shrew:

O Tranio! till I found it to be true,
I never thought it possible or likely;
But see, while idly I stood looking on,
I found the effect of love in idleness;
And now in plainness do confess to thee,
That art to me as secret and as dear
As Anna to the Queen of Carthage was,
Tranio, I burn, I pine, I perish, Tranio,
If I achieve not this young modest girl.
-Luciento, The Taming of the Shrew, Act I Scene 1

Of course it is perhaps most famously known as one of the flowers mentioned by poor Ophelia as she slowly goes crazy in Hamlet:

The pansies we think of now, of course, are not the flower Ophelia is describing here, but instead the precursor to that hybrid garden pansy V. tricolor (modern pansies were not introduced until the 19th century). In fact the name Pansy comes from the French word “pensée” which means thought. 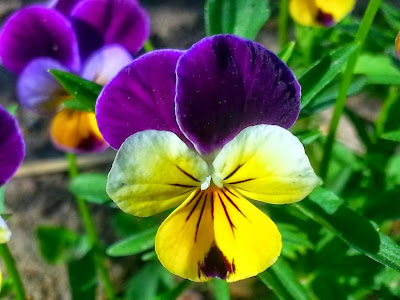 But of course you don’t care about any of that illustrious history, do you? No. You just want me to get to the dirty parts. Well, fine then.
The herbalist Nicholas Culpeper wrote in his 1652 book The English Physician that Heartsease:

is really saturnine, something cold, viscous, and slimy. A strong decoction of the herbs and flowers (if you will, you may make it into syrup) is an excellent cure for the French pox, the herb being a gallant antivenereal: and that antivenereals are the best cure for that disease

Don’t you just get the feeling that everyone had syphilis at this time in history?

And because of its association with Cupid and his arrows, it became a flower of lustful lovers as well. Trust me, folk names like “kiss her in the buttery” and “come and cuddle me” don’t happen to flowers who are exchanged between lovers who like to simply hold hands.

However by the Victorian period something strange happened to the public’s perception of the wild pansy. It became a flower of chaste and untainted love, unaffected by silly things like lust and desire. This transition happened in part by the growing advances in botanical science. It was discovered that certain species of plants (Viola being one of the largest groups) actually produced seeds through cleistogamy (or automatic self pollination). Plants that produce cleistogamous flowers do not need to use resources to produce colorful petals or nectar or any of the other seductive tricks they use to lure pollinators. Instead, the cleistogamous flower never even opens. Once it is fully formed, the pollen is transfered to the stigma within the closed flower and seeds develop.

Imagine the wonder the somewhat repressed and overly proper Victorians must have felt when they learned this fact. Here was a flower that didn’t need to engage in any of that birds and the bees nonsense! Reproduction without any outward appearance of sexual behavior! Finally, a flower that was a chaste and pure as the best of them.

How strange that the entire symbolism behind a flower can change that drastically over a few hundred years.

One thought on “Lusty Lovers and Chaste Love: Wild Pansy Throughout History”